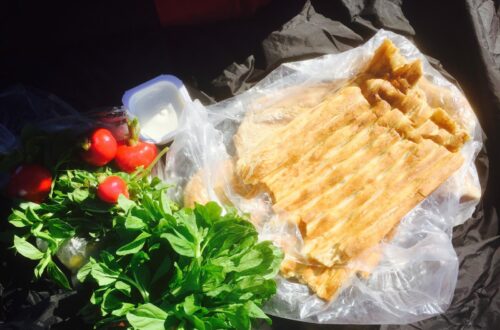 She punches the dough, kneads it, dips her whole hands in it, presses it between her fingers, watches it emerge between her phalanges, like a repressed desire resurfacing.

Noon Barbari.
Bread of the Barbarians?

No. He is no Barbarian, and his country is that of the refined, of the elegant, of the poets, of the erudite.

Except all they did was tell her about religion, hijab position and sleeve length.

When she was a child, she had learnt to play Green Sleeves on the ocarina.
She pictured a tall, thin woman, with a pale complexion contrasting with the deep green of her velvet dress. A Scarlett O’Hara whose seductive weapon was made of old curtains.
Draper sa honte dans des pompons et prétendre être victorieuse, même nue pied.

She cuts the dough in half, quickly moists her hands and starts forming a log.

There had been another one, another man, who had felt what she had come to Iran for, the moment he had laid eyes on the road she wanted him to take her to.

He had spent hours, days, walking the path next to her, explaining in his bad and melodious English the meaning of the words, trying to convey the images, metaphors and ideas’ beauty sheltered within the songs he sang to her at night, in the mountains’ fresh air.

They slept in the same rooms along the roads of the Assassin’s Valley, protected by the rock of Hassan Ibn-al-Sabbah’s impenetrable castle, warmed by electrical heaters and the hot vapor of the samovar.

She dips her fingertips in the glaze and flattens the dough into an oval shape.

In every little mountain refuge or village cabin they went to, were piles of soft foldable mattresses, resembling large pillows and covered in flamboyant cloths, filling the room with colors atop the thick and precious carpets.

At first, she found the songs somewhat strange, almost funny.
Was that the beautiful Persian poetry? Noon o panir o sabzi?
Bread, cheese and greens? Were these the words sang by the mystics during one thousand and one nights?

But soon she had started to understand the powerful simplicity of the form, the mighty minimalism of the complaint.

Upon every minaret, they are executing people’s voices
Again the red rose dies, the never ending stories repeat

And now, drawing long ridges into the length of the dough she understands that behind her elegant barbarian and lost poet’s refusal to bring her to the country she has been dreaming about, doesn’t stand another woman whose name would sound like the quiet murmur of a waterfall and whose dark hair would be a nest for the night to rest.

Behind his refusal stands his own nostalgia, his own pain, his own broken memories of a country he had to flee.
Behind his refusal lies his own impossible desire to roll down the sandy hills of Yazd, lay his tired body on the blue tiles of Ispahan’s Shah Mosque, watch Tehran wake up from the snowy Darband, or hike the green hills of Rojhelat.

She sprinkles the bread with the sesame seeds she has brought back from the bazaar of Kashan, places the tray in the oven.
Takes panir out of the fridge and climbs the wooden ladder leading to the roof, where she collects the sabzi that are growing in broken pots.
Basil. Mint. Cilantro. Tarragon. Watercress. Green onion. Chives. Radish.

One day, she will bake him a Noon Barbari. They will sit on the grey tiles of her kitchen in Neukölln, next to her second hand German oven and electronic beats will rise from Hochbrechstrasse.
They will close the window and look at the glazed dough rise a little while its color ever so slowly deepens.
Then they will open the oven’s door, heat spreading in the air and warming them deep inside their chest. And they will spread cheese and herbs on the golden crust, while sipping on sugar cubes dipped in Masuleh cha-y.

One day, together, they will listen to Noon o Panir o sabzi.

Bread and cheese and almonds, the never ending story…

Recipe to cook two flat breads of Noon Barbari
• 3 1/4 cups All purpose flour
• 1 teaspoon Baking Powder
• 1 teaspoon Salt
• 2 1/4 teaspoons Active dry yeast (1 packet)
• 1/2 teaspoon Sugar
• 1 1/2 cups Lukewarm water
• 1 teaspoon Flour
• 1/2 cup Water
• 1/2 cup Corn meal (preferably coarse)
• Sesame seeds and/or Nigella seeds (Kaloonji seeds)
1. Mix sugar and warm water in a bowl. Sprinkle the yeast on top. Proof the yeast by letting it sit for 10-15 minutes.
2. Mix half a cup of water and one teaspoon of flour in a small pot and bring it to boil to form a thin glaze. Set it aside to cool.
3. Whisk the dry ingredients (flour, baking powder, salt) in a large mixing bowl. Add the yeast to the mixing bowl and stir quickly and vigorously with a wooden spoon until the water is absorbed. This will form a somewhat dry and perhaps clumpy dough. Resist the temptation to add more water or to knead the dough. Cover the bowl with plastic wrap and place in a warm oven (about 110 degrees). Let the dough rise for about 1 hour and 15 minutes or until more than doubled. Alternatively, you may leave the dough at room temperature and let it sit until double in size.
4. Preheat the oven to 475 degrees.
5. Sprinkle a baking sheet with corn meal generously. Punch the dough down and cut it in half. Form a thick log from a piece of the dough with moist hands. Place the log on the center of the baking sheet. Brush the top of the log with the glaze mixture. Dip your finger tips in the glaze and flatten the dough Into a 12″X5″ oval shape. Keep dipping the tips of two fingers in the glaze and draw long ridges along the length of the dough while stretching it into a 15″X7″ oval and creating a fluted surface (5-6 fluted ridges).
6. Sprinkle the bread with sesame seeds or nigella seeds. Place the tray on the bottom rack of the oven. Bake for 12 minutes or until the bread is crusty and golden brown. It is OK to peek after about 8-10 minutes.
7. Discard any remaining corn meal in the pan. Repeat steps 5 and 6 for the second piece of dough.
8. Barbari bread does not keep well and is best served warm out of the oven or kept in the freezer. Cut into pieces and freeze. Thaw and heat in a toaster before serving.